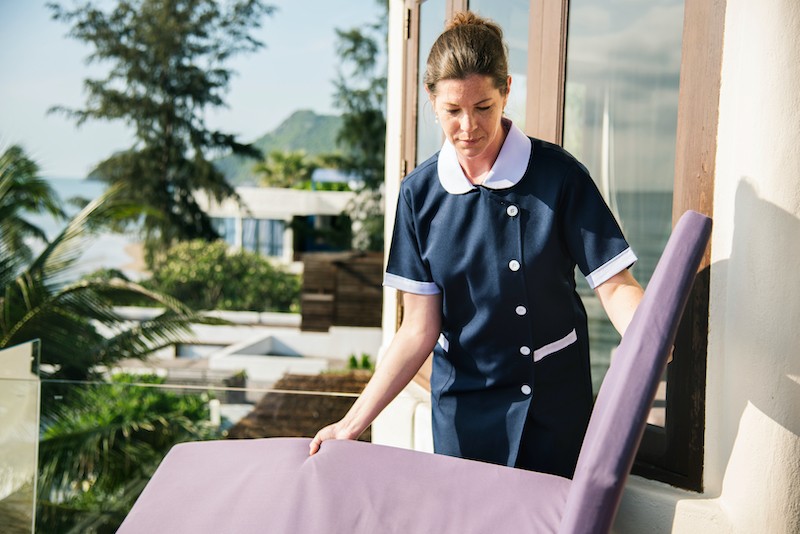 If you’ve had to deal with mildew in the past, you’ll know how stubborn this sort of growth can be. It doesn’t take much time for mildew to form, especially in environments with little protection from the elements, making things like outdoor furniture look their worst. This article will be exploring mildew and its causes, along with some of the best ways to remove mildew from outdoor furniture. This should give you the chance to fight back, no matter how frustrating your mildew problem is. Keeping your outdoor bean bags dry and free from dirt is essential to their longevity.

What is Mildew and How Does it Form?

Before you start getting rid of your mildew, it’s worth building an understanding of what it is. Mildew is a type of mould that can form on the surface of organic materials like wood, wicker, and cotton. Primarily a plant disease that would naturally attack plants and crops, this type of mould has become extremely common in and around people’s homes. Unlike other types of mould, mildew only spreads around the surface of a material, rather than spreading up and out. This can make it easier to get rid of, but also means that mildew can spread very quickly.

Mildew will usually form when there is a lot of moisture around. In the case of outdoor furniture, this could be moisture from rain, in the air, or even water that you add into the environment. Once a spore from an existing mildew colony has made it to a damp organic surface, the mould will start to form. Thankfully, rather than causing significant damage to your furniture, mildew will usually look unsightly.

Two different types of mildew are commonly found. While this won’t impact the work that goes into cleaning your furniture, it will make it easier to identify your mould if you know what to look for.

Downy mildew mainly affects plants. It will start white, slowly becoming yellow, brown, and black as the mould forms. This type of mildew is typically fluffy and looks similar to the down you find on baby chicks.

Powdery mildew is usually found on food crops, and it usually skips the white stage and goes straight to yellow and black. This type of mildew will make a surface appear powdery, releasing clouds of spores when it is disturbed.

Can You Remove Mildew from Outdoor Furniture?

Removing mildew from outdoor furniture is far from impossible. With the right tools and methods, you should be able to keep your furniture free from mildew, making changes that will last for years to come. The way you approach this will very much depend on the material used to make your furniture. For example, wood is much hardier than wicker, and this means that you can use more potent chemicals on it. We’ve broken down the different materials found in outdoor furniture below.

How to Remove Mildew from Outdoor Furniture

When removing mildew, it’s essential to keep in mind that this isn’t going to come without some work. You’re going to need to use some elbow grease to get rid of mould like this, and it could take many hours for you to be done with the job. It can worth wearing a mask in cases of extreme mildew, as the spores that it releases can play havoc on your lungs.

Wood is one of the most common materials to develop mildew. Made from trees, this material is used in gardens across the world, and it’s likely that at least some of your furniture or outdoor buildings are made of the stuff. Thanks to its rough surface, it can be hard to remove mildew from wood without taking some of the surfaces with it. This means that you’ll likely need to use some chemicals on your wood to remove the mildew from it.

You can make a solution at home that will work for this kind of mould, mostly using ingredients that can be found in your kitchen cupboard. Mixing a gallon of water with 1 cup ammonia, 1⁄2 cup white vinegar, and 1⁄4 cup of baking soda will give you a potent mix that will be able to have a huge impact on your mildew. You can use a washcloth or sponge to apply the mixture, rubbing gently to remove the mildew without harming the wood underneath. Keeping some of this mixture for future growth is a good idea.

Removing mildew from wicker can be ever more challenging than dealing with wood. While the surface of materials like this is smooth, they always have plenty of nooks and crannies for mould to get into. You’re unlikely to be able to use your washcloth or sponge to remove mildew from furniture like this, aside from any that is on the outside.

Using a hose can be a good way to overcome this issue. You can spray your wood solution into the cracks, leaving it to sit for a while to do its work on the mildew. Following this, it will be time to hose the furniture down, making sure that you get into all of the little gaps. A pressure hose can help with this, though most people find that they can make their hose more powerful by simply placing their finger over the end of it. This will help you to remove your mildew without worrying about damaging the wicker beneath it.

It’s rare to find mildew on materials like metal, as they aren’t organic and don’t give much food to mould. Of course, though, if you’ve got mildew on furniture like this, you probably aren’t worried about how rare it is. Instead, you’re going to want to remove it. A damp cloth and some elbow grease are all you need for this, with metal being hardy enough to take even the roughest of treatments. Of course, though, it’s worth thinking about the paint on the furniture your working on, as this could be easier to remove than you might expect.

Removing mildew from fabrics can be one of the biggest challenges you’ll face in your garden. Mould can get right into a material like this, often making its way into places that you simply can’t clean. For this reason, you have more options when it comes to removing mildew from furniture like this than anything else, but you have to choose carefully to make sure that you are using the right one.

Mixing dishwashing detergent, borax, and some baking soda with water will give you a potent mix that won’t damage the fabrics you’re working on. This is great for fabrics with dyes, as it won’t be harsh enough to remove the colour or leave stains. Just scrub in a circular motion until your mildew is gone, using the solution whenever you see more mildew starting to form.

Adding a little bit of ammonia to your homemade solution will give it some additional kick, making it even easier to remove the mould from your fabrics. Of course, though, it might be worth doing some research, as ammonia is quite strong and could easily damage certain fabrics if you use too much.

Hydrogen peroxide is used for dying hair, but it can also make an excellent cleaning solution. This chemical is strong enough to remove both the mildew itself and the smell that can come with it, but you have to be careful, as peroxide is a type of bleach and it can change the colour of fabrics. You should always test chemicals like this on a sample area before you use it everywhere.

You can easily make lemon salt at home by simply mixing lemon juice and salt. This sort of solution is easy to use, cheap to buy, and most people can make it right away. Lemon juice is an acid that can make it much easier to remove mildew, without risking damaging your fabrics in the process.

As you can see, removing mildew from fabrics can be approached in a number of different ways. The option you choose will impact the whole job, with some people finding it easier when they use strong chemicals. Whatever you use, it can be worth wearing a mask as you do this, with most mildew releasing spores when it is disturbed.

After spending hours scrubbing and working to remove mildew from outdoor furniture, it’s unlikely that you want to start the whole process again in a year’s time. Thankfully, there are loads of ways to approach this, and you can easily find ways to prevent mildew growth in the future. Like any living thing, this sort of mould needs the right environment, and you can easily take this away.

Moving your furniture to indoor storage when you’re not using it will make it much harder for mildew spores to find it.  Not only will spores find it hard to get to furniture like this, but you will also be able to keep your furniture a lot dryer. Be sure that your furniture is completely dry prior to storing it, as any dampness will encourage mildew. It is OK to store your outdoor furniture in a shed or garage, provided there is no moisture in the air. Consider using ‘closet camels’ to remove moisture from the air. You may also want to wrap your cushions or bean bags in plastic bags.

Materials like wood don’t have to be susceptible to mildew whatsoever, with plenty of permanent treatments on the market that can put a barrier between your wood and the outside world. Waterproofing treatments are often best for this, making it very hard for moisture to get into the wood, while also stopping the mildew from taking root.

Mildew can be almost invisible, making it very hard for you to react to it before it forms a full-blown colony. This can make regular cleaning very worthwhile, giving you the chance to stop mildew as it forms. Using the chemicals you’ve made to clean the mildew in the first place can help with this, making it much harder for the mould to make a permanent home.

Mould issues like mildew can be extremely difficult to live with. A lot of people find their gardens taken over by the stuff, and it can feel impossible to get rid of it when you are dealing with it all the time. Of course, though, with the right time, patience, and methods, this is a problem you should only have to deal with once.

We have a range of beanbags designed for outdoor use. Bean bags made from non-organic materials, like polyester, can be used both indoors and out, without developing annoying mildew. This is why our outdoor bean bags are perfect for all sorts of outdoor environments.

Spread the love
This entry was posted in Outdoor Furniture.