Bean BagsWhat are the Little White Balls in Potting Soil? 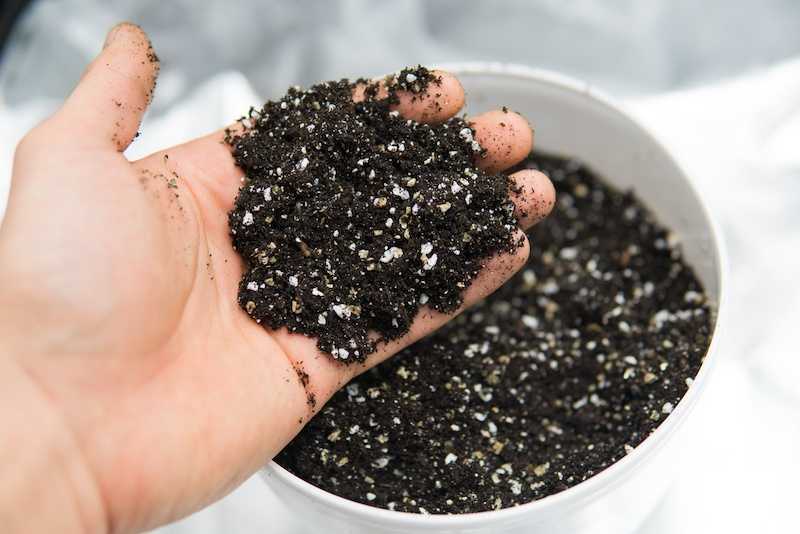 Picture this. Imagine you’re excited about growing plants in your garden. You head off to the garden centre to pick up some potting soil. When you get home, you open the bag. You pour the soil into your pots and start getting ready to plant your cuttings and seedlings. However, when you do, you notice polystyrene like little white balls in the potting soil. That’s not right. Potting soil is supposed to be a natural substance. Why would there be bean bag beads in the mix?

As it turns out, those little white balls in potting soil aren’t actually synthetic at all. They’re an ingredient commercial potting soil vendors that provide additional nutrients to your plants and allow water to drain.

What are the little white balls? Are they bean bag beads?

The small styrofoam-like particles in your potting soil are a mineral called perlite. It’s made when lava rock from volcanoes cools, trapping tiny quantities of moisture inside. Initially, it looks like glass (usually because of the crushing weight of the Earth on top of it). But when heated, the water molecules inside expand. This expansion puts pressure on the rock walls, eventually causing them to “pop” and become much less dense. That’s why people sometimes call perlite “volcanic popcorn.”

How is perlite made?

Perlite is officially a type of volcanic glass. Chemically, it is straightforward, SiO2 or silicone plus oxygen. But it also comes with high water content, usually resulting from the hydration of obsidian rock.

Perlite is unusual among rocks because it expands when you apply heat. When this happens, the density reduces, becoming up to thirteen times lighter per unit volume than before.

Horticultural perlite – the type you see in your potting soil – is made by taking SiO2 glass from mines and heating it to high temperatures. This process causes the rock to expand by more than 1,000 per cent, resulting in a popcorn-like effect (and sounds). The result is a mineral that’s very lightweight and perfect for including in potting mixes.

If you were to look at perlite under the microscope, you’d see that it comprises many tiny cells, a bit like a sponge. Moisture penetrates the interior of the perlite and makes it waterlogged. This process then allows it to provide the soil with a water reservoir, even when the rest of it dries out.

Why is there perlite in potting soil?

The purpose of potting soil is to provide plants with a medium that promotes healthy growth. Perlite is one such ingredient, so vendors often include it in their products.

Perlite offers multiple benefits for the soil. These include:

Recall earlier; we said that perlite has multiple tiny pores or cells on its surface and throughout its structure. This factor gives it potent aeration properties, so much so, in fact, that some people call it “air for the soil.” Its very presence helps to keep the soil loose around the roots, allowing them to breathe. The microcavities it creates prevent compaction.

Perlite is also an exceptional moisture delivery ingredient. The porous structures on its surface hold onto water, providing roots with intermittent moisture when they need it. It allows the soil to drain and hold onto moisture for longer, reducing the risk of the roots drying out.

Ideally, potting mixes should use perlite. While perlite isn’t an organic substance in the strict sense, it is natural, formed from cooling lava flows. However, not all potting vendors use it. Some replace perlite with cheaper imitations that function the same but damage the environment. Using polystyrene bean bag beads in soil, for instance, is a common practice.

If in doubt, check the label. It should list perlite as an ingredient. If it contains styrofoam or any other plastic-derived compound, switch to a different brand. Adding styrofoam to your potting soil adds plastic to the environment.

Sometimes people can mistake perlite for gypsum – a type of fertilizer. Gypsum is a mineral made of calcium and sulphur, formed of repeating chains of calcium sulphate dihydrate. Like perlite, people use it in both horticultural and building applications.

Gypsum looks similar to perlite and performs a similar function in potting soil – a reason why people confuse the two. Vendors use it to break up compact soil, especially clay soil, providing more aeration to the roots. Horticulturists will use it to recover overcropped, flooded or weathered soils.

Gypsum removes excess sodium from the soil and adds calcium. It can also improve water run-off, reduce erosion, and help seedlings emerge from seeds below the surface. Unlike perlite, it fertilises the soils with calcium and sulphur ions.

Some potting mixes contain both perlite and gypsum. So, if in doubt, refer to the ingredients label.

Perlite isn’t a hazardous addition to your potting mix. But it does come with several warnings. Regulatory agencies, for instance, classify it as a nuisance of dust. Perlite is capable of throwing fine particles into the air, which could cause reactions for some people. So if you are using it in large quantities, you’ll need to wear mouth and eye protection to prevent irritation. People with asthma need to be especially careful to prevent dust from entering their airways.

Is perlite an organic substance?

Whether perlite is an organic substance depends heavily on your definition of the word organic.

Chemically speaking, the answer is no – perlite is not an organic compound. That’s because it contains silicon, not carbon.

However, from a gardening perspective, most people consider it organic because it’s “natural.” It doesn’t go through any synthetic processes or have any unnatural additives. Its chemistry is unchanged, even when popped.

In this sense, perlite isn’t really any different from fish fertiliser or seaweed emulsion. Yes – it has gone through some mild processing. But it won’t harm the surrounding environment or throw it out of balance.

Because of perlite’s minimally processed status, it is safe to use it in organic horticulture. It won’t invalidate your grower status if you’re a farmer.

How to use perlite

So how should you use perlite (which looks a little bit like bean bag beads)?

Because perlite retains moisture in compost, it can improve the chances that your cuttings take root. To begin with, take a fine-textured compost designed specifically for cuttings. Then add perlite granules in a fifty-fifty ratio. Mix it all together thoroughly, and then add it to your pots. Lastly, water it and then allow the mixture to drain for a few hours before adding your cuttings.

You can also grow cutting in perlite alone. To do this, wet the perlite granules and then place them in a polythene bag. Next, prepare the cuttings by cutting below the leaf joint and remove any leaves on the lower part of the shoot. Place the bare section of the shoot into the perlite, fill the bag with air and then seal shut at the top.

After a day or two, you should notice that roots start to appear. Once they do, transplant them out of the soil and into your regular potting mix.

You can also use perlite for seed sowing. Again, the process is relatively straightforward.

Start by mixing the perlite with compost in a 50:50 ratio and then gently moisten. Then sow the seeds and cover them in a fine layer of perlite. This process aids germination by trapping moisture in the soil while also allowing light to enter from above.

Lastly, as discussed above, you can add perlite to the soil to aid with drainage. Sometimes, soils can become quite claggy and compressed, especially in high footfall areas, like lawn paths.

If you want to improve draining, create a mix with one part perlite to four parts soil. Then dig up the affected area and replace the soil. You should notice that grass and other plants begin growing again.

Perlite and bean bag beads are different, even though they might look similar. Perlite is a type of air-filled volcanic glass, while bean bag fillings are usually extruded plastic or dried beans.

But as we have seen, some soil vendors also use polystyrene, adding to the confusion. Both these materials provide the same function in the soil, but perlite is natural, while plastic beads are synthetic. In that sense, therefore, the fillings of bean bags and potting mix are sometimes the same.

So, in summary, those little white balls are called perlite, volcanic glass heated to more than 870 degrees with an ultra-low density. In horticulture, the purpose of perlite is to support soil drainage and improve aeration. It’s great for potting mixes, but it can also help recover compacted soil where plants won’t grow.