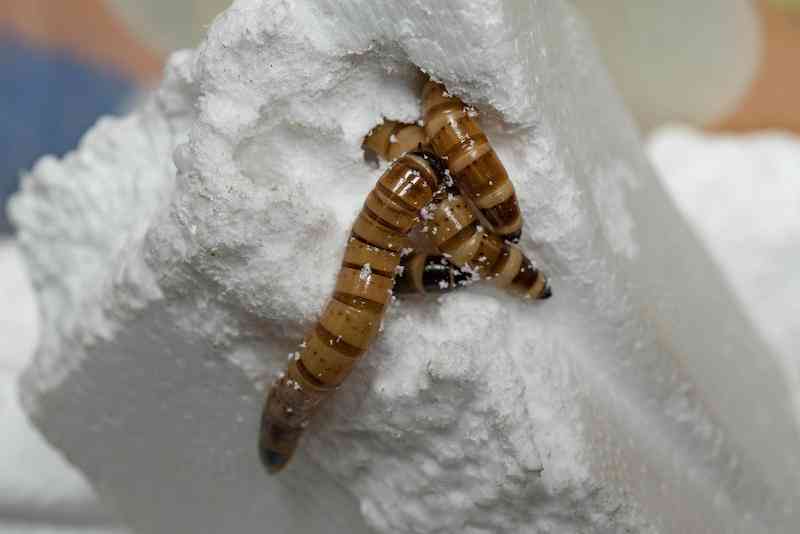 Polystyrene is a type of plastic used in numerous applications, including toys, gardening equipment, electronics, appliances, and, incidentally, bean bag filling. But can polystyrene be recycled? Let’s find out.

Common knowledge says that plastic is something that remains in the ground forever and doesn’t break down. That’s because, we’re told, nature has no way of processing or deriving energy from it.

But new research says that that view isn’t entirely correct. It turns out that a certain type of scavenger larvae can break down polystyrene into harmless byproducts. Offering a potential solution to the planet’s ongoing plastic crisis.

Scientists publishing in Science of the Total Environment recently found that the larvae of a type of beetle called Zophobas atratus can eat styrofoam as their sole diet. Bacteria in their guts break down the polystyrene and convert it into a mix of minerals, energy, and carbon dioxide. This new research adds to earlier findings which found that another species, mealworms, could also digest plastic.

The news that these larvae, sometimes called superworms, can eat polystyrene-based products is welcome to manufacturers of plastic containing products. Polystyrene is one of the most-used plastics globally and a major potential source of industrial and consumer pollution. However, a small worm that harbours bacteria that can break down this material is of extreme importance to global ecology. It means that the number of plastics nature can break down is now far greater than scientists previously imagined, offering hope to both the ecosystem and manufacturers who use plastics.

Why Zophobas atratus can break down polystyrene has to do with the worm’s evolutionary history. In the deep past, worms had to find ways to digest the constituents of wood – one of the food sources in their environment. Some of these components were particularly tough to break down because of their structural qualities. In fact, the evolutionary process to develop the necessary tools may have taken life millions of years to develop.

Eventually, however, many species succeeded, conserving the traits, bringing them to the modern day. Over evolutionary timescales, insects, mealworms and superworms all developed the ability to scavenge difficult-to-get wood-derived energy, creating the soil that we see all around us.

How do superworms eat polystyrene?

In 2015, a team-based at the School of Life Science at the Beijing Institute of Technology in China found that a type of mealworm beetle, Tenebrio Molitor, could degrade and mineralise styrofoam. Research indicated that they had a type of gut bacteria that contained an enzyme that degraded plastic. However, the worms themselves were small, and so their feeding rate was low. Under laboratory conditions, they could break down polystyrene-containing products, but it took a long time.

Because of this, the team wanted to find out whether larger worms with the same gut bacteria could do a better job. Zophobas atratus was the perfect candidate, being around four times as large as Tenebrio Molitor. The Beijing team began designing an experiment to see whether these superworms did a better job than the mealworms at breaking down plastics.

They divided the worms into two groups and put them into different glass incubators fitted with rubber stops filled with compressed air, minus carbon dioxide. One group got styrofoam as their sole diet, while the other got a natural diet of wild bran, fed over 28 days. Both groups produced carbon dioxide during the course of the study, so the scientists subtracted the amount produced by the control group from the amount emitted by the plastic group.

The experiment found that superworms could eat substantially more polystyrene per day than mealworms in the 2015 study. Estimates suggested that each worm was able to process around 0.58 mg of polystyrene per twenty-four hour period – about four times the amount of Tenebrio Molitor. The researchers found that the styrofoam group successfully converted 36.7 per cent of the polystyrene into carbon dioxide.

Post-experiment scientific analysis revealed that bacteria in the worms’ guts could break down long chains of polystyrene molecules and convert them into smaller, low molecular-weight products. To test whether the bacteria in the guts of the worms were doing the hard work, the researchers fed them antibiotics to kill their gut flora. When they did this, they found that the worms could no longer derive energy from eating plastic.

The plan now is to harvest the bacteria from the worms and then insert them into insects or even use them to recycle polystyrene in special facilities. Currently, superworms have a limited range in the natural environment, meaning that they may not break down plastics more widely. Furthermore, over time, they develop into beetles, meaning their time spent in the environment is typically quite short. For these reasons, researchers want to insert the polystyrene-digesting bacteria into other species, including insects, and then get them to do the clean-up work over time.

The Beijing researchers also highlighted the possibility of isolating bacterial enzymes to down plastics and rubbers on an industrial scale. It is possible, they said, to test a range of plastic-degrading bacteria to see whether they may be able to solve existing and future plastic waste problems.

Federica Bertocchini, a biologist located at the Margarita Salas Center for Biological Research in Madrid (who was not a part of the study), said that the findings of the Beijing team made it more likely that researchers would find an enzyme capable of degrading plastic. Eventually, she hopes, it will become a useful tool in the current biotech tool kit.

How Does It Affect the Worms?

Interestingly, worms that eat polystyrene seem to be just as healthy as those fed a natural diet. Previously, Dr Anja Malawi Brandon, a PhD candidate based at Stanford University not involved in the Beijing study, found that mealworms could process flame retardant-laden styrofoams. While compounds such as hexabromocyclododecane are toxic to people, Brandon found that mealworms eating them were just as healthy as those on the normal diet. Furthermore, Brandon found that shrimp fed on toxic flame retardants and styrofoam also seemed to do well. The chemicals did not bioaccumulate in their tissues over time.

Brandon says that scientists aren’t sure whether bacteria are evolving the ability to digest plastics or whether they had them all the time. Researchers will need to identify the history of the specific genes involved to piece together that puzzle. But the fact that bacteria appear to have an enzyme that can break down plastic and derive energy from it is fortuitous. It suggests that nature already has the building blocks to deal with the plastic problem. Plastic in the environment may represent a new and important biological niche for species. And, naturally, over time, species may take advantage of it.

There is certainly an evolutionary drive to find chemical means of breaking plastic bonds and deriving high energy from the resulting reactions. But few investigators, however, believed that the ability to degrade plastics would be so widespread.

Can polystyrene be recycled?

Polystyrene can be recycled, but doing so is fraught with challenges. Polystyrene isn’t recyclable via curbside collection in most countries because it is expensive and logically challenging to build styrofoam-recycling machinery. Furthermore, there are practical difficulties. Difficulties such as the fact that styrofoam is so easily blown around by the wind make the curbside collection more challenging.

Recycling polystyrene requires a three-step process: granulation, compacting and densifying. During granulation, recyclers feed polystyrene waste through a machine called a granulator. This breaks down the plastic into tiny beads and mixes them with fresh polystyrene granules.

The next step is to compact the polystyrene – something that’s required for denser forms of plastic. A machine compresses the granules and creates a thick, dense bale of polystyrene. Recyclers then feed this product through a shredding machine to create general-purpose polystyrene pellets.

A final process is called densification. Here, recyclers feed expanded polystyrene through a foam densifying machine. It exposes shredded material to high heat and pressure, forming it into a paste that cools into a solid block with all air extracted. Recyclers can then shred these blocks and turn them into general-purpose pellets, as before.

There are quite a few uses of recycled polystyrene. Manufacturers use pellets for storage and transport services. They’re instrumental in industries requiring high sanitation standards because of the sterile properties of the plastic.

Critically, recyclers can break down recycled plastics into pellet form. And then reuse them again, preventing them from returning to the environment. Common secondary uses include packaging, refrigerator trays, toys, foam and cups. Some vendors also include recycled polystyrene in plastic furniture and building materials, including fence panels and roof tiles. As technology improves, the use cases for recycled polystyrene are expanding.

While recycling processes for polystyrene are well known, it remains difficult for local authorities to collect and process. For that reason, most recommend that people just put plastic in their general waste bin.

Polystyrene is difficult to process mainly for several logistical reasons and economic reasons. Because it is bulky and diffuse, it is challenging to collect and transport. The machinery required to process it is also expensive, particularly if it contains unwanted chemical contaminants. Polystyrene bound for recycling needs to be free from flame retardants before processing. Adding additional machinery and processes to remove these adds to the cost.

Businesses, however, are generally doing a better job at recycling polystyrene than public authorities. Companies collect contaminant-free polystyrene in bulk and send it to recyclers in vast quantities, especially on the retail side.

However, ideally, both businesses and individuals would prefer to avoid having to recycle. Bacteria and enzymes may be able to break down plastic and wholly eliminate it from the environment.

In many ways, it is a shame that polystyrene is so difficult to recycle. Producing polystyrene is a relatively low-carbon-emitting activity compared to many other plastics. Because so much of the product is air, more than 98 per cent in some cases, recycling it more widely and removing it from the environment after use could be a substantial boon for the global environment.

The news that superworms can break down polystyrene is welcome, given how difficult it is to recycle the material. Estimates suggest that the world produced around 359 million tonnes of polystyrene in 2018. But recyclers only processed around 33 million tonnes. Polystyrene is challenging to break down because of its particular macro-molecular structure. Neither artificial nor natural systems can break it down easily. Thus, it tends to accumulate in the environment, building up each year.

With that said, things are changing. It appears that a greater number of creatures are using plastic-eating as a niche, learning to consume the energy material. Zophobas atratus is just the latest in a long line of organisms that various studies show can break down plastics and turn them into harmless, natural byproducts. In the future, it may be possible to insert plastic-digesting bacteria into more species or extract enzymes that break down plastic and use them in industrial processing, bypassing the need to recycle at all. Eventually, plastic could become just as “natural” as any other food source in the environment.

For bean bag producers, these developments are particularly welcome. Now we know the answer to the questions: “can polystyrene be recycled?” and “can superworms eat styrofoam?” It appears bean bag manufacturers will be able to continue using state of the art plastic-based fillings – safe in the knowledge that there are natural methods able to break them down.