FabricsWhere Is the Sunniest Place on Earth? 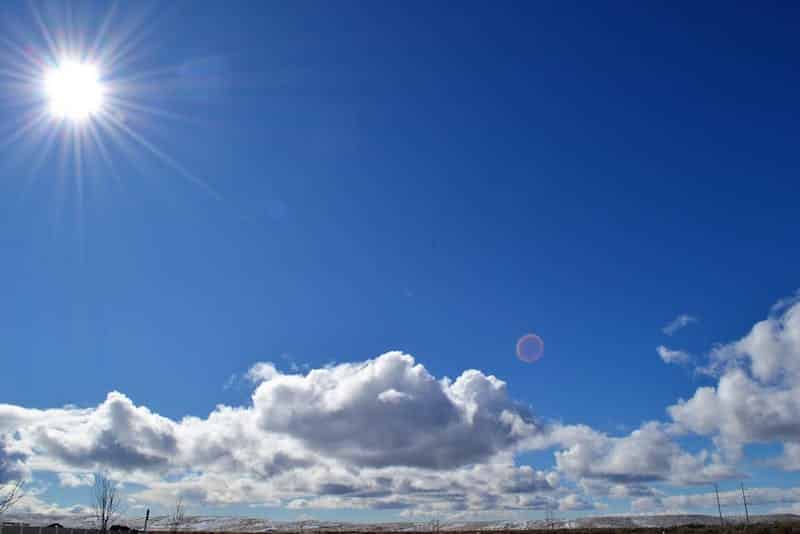 Billions of dollars of solar power investments could be driven by research into the world’s sunniest places. So, says a report on NASA’s analysis of satellite data.

Wondering where the sunniest place on Earth is? Read on and find out in this guide.

The Contenders for Sunniest Place on Earth

Deciding on the sunniest place on earth is no simple matter. There are different ways of thinking about the question. Depending on what “sunniest place” means you can get some surprising answers.

You might think of deserts as being strong contenders. Movies about very sunny places feature North African or American deserts. They conjure up images of thirsty adventurers searching for water under the pounding sun.

A counterintuitive suggestion for a sunny location could be in the middle of an ocean. As 71% of the earth’s surface is covered by water it would be highly probable that the sunniest location is at sea rather than on land. Switch the movie from “Lost in the desert” to “lost at sea” and you can imagine the sun beating down on thirsty shipwrecked sailors.

Another contender for the sunniest place on earth could be a very cold place. The North Pole boasts plenty of sun for at least some of the year. Regions near the arctic circle are not called the land of the midnight sun for no reason.

Let’s examine the case for each of these contenders. Along the way, we’ll learn a little about our world and challenge some commonly held beliefs.

NASA researches the worlds sunniest locations. It uses satellite data to map the worlds sunny places. A look at their map of the world showing the amount of solar energy reaching the earth quickly reveals the sun-drenched hot spots.

Southern California, the Sahara Desert and parts of China are very sunny. There are huge areas of ocean in both the Pacific and Atlantic that receive a lot of sunshine.

Australia also features in the statistics. Solar radiation maps show Australia as being a large area of high sunshine.

The sunniest locations may not be the best places to take a holiday. We might like to float in a sunny pool or catch some rays on a sun lounger but the sunniest places in the world are probably going to disappoint you. They are often in locations with low populations and hostile conditions.

Sunniest Place: Who Wants to Know?

“Where is the sunniest place on earth?” isn’t just a trivia quiz question. Knowing how much sun there is can be very important for all sorts of reasons. It might matter to us all more and more as climate change and alternative energy sources become more important.

The sun is an important source of energy. Solar power is a significant alternative to carbon-based fuels.

Solar energy is less damaging to the environment. It doesn’t produce greenhouse gases. It may be helpful in reducing man-made global warming.

If you are interested in where it is best to locate solar panels it is very useful to know how much sunshine there is. It may be a good idea to locate solar panels in the deserts of the middle east in direct competition to the environmentally damaging oil wells. Alternatively, can we use all that sunshine on the ocean waves to solve our energy crisis?

As climate change and energy usage impact more and more, we all have an interest in answering this question.

So, let’s start by travelling up to the frozen north. The cold weather and brutal weather conditions are deceptive. Sunshine is plentiful in northern areas.

If by “sunniest place” you mean where on earth are there long continuous periods of sunshine, look no further than Canada.

Ellesmere Island in Canada has incredibly sunny weather. This remote location has very little population. The only residents are temporary visitors to military and research facilities.

During the month of May, they have 15 hours of bright sunshine a day and it doesn’t ever get dark. There are 24 hours of daylight. There is no night time and this time of year.

It’s sunny but it’s not sunbathing weather and the average temperature is -10ºC (14ºF). The reason for this extended period of sunshine is that Ellesmere Island is inside the Arctic Circle. During summer the sun doesn’t drop below the horizon.

There is very little rainfall in the Arctic. As a result, there is no cloud cover and the sun’s rays reach the earth’s surface. For at least part of the year, this part of Canada is a strong contender for the sunniest place on earth.

In December the story is very different. There is no day. It is continuous night and at this time of year, it becomes a contender for the least sunny place on earth.

Yuma in Arizona has between 11 and 13 hours of daylight. The difference between winter and summer is much less due to the more southerly location.

You might wonder why Arizona is sunnier than an even more southerly location such as equatorial Africa. Equatorial Africa and southern American regions such as the Amazon basin have roughly equal periods of day and night. These stay pretty constant in summer and winter.

The problem with these tropical regions is that they also have large amounts of rainfall, hence the term “rainforest”. The cloud cover blocks out the sunshine. Even though they are hot places that are not sunny for long periods during the day.

High-pressure weather systems in the south-west United States keep the skies clear and free of cloud cover. The warm rain-filled air than rises in the equatorial regions to produce heavy rainfall sinks in the regions of the earth at 30 degrees north and south of the equator.

These regions in the Americas, Africa, and China have little rainfall and this is why they have arid and desert-like conditions. There may be serious contenders in other desert locations but climate records are not as well researched elsewhere. Perhaps Arizona is the sunniest “recorded” location.

If most of the earth’s surface is covered by water, it is likely that the sunniest location is over water. School students are taught that sunshine on the world’s seas and oceans evaporate water lifting it up in the atmosphere. It then condenses into clouds and falls as rain.

The oceans and seas may be the place to look for long continuous periods of sunshine. Indeed, that is exactly what NASA has done. NASA has identified the worlds sunniest locations and an area of the ocean is especially sunny.

Just south of Hawaii and east of the Pacific island of Kiribati is a very sunny location. This huge area of Ocean has similar sunshine levels of desert areas. Only the occasional island and international cruise liner get to experience these rays of sunshine.

It’s Not That Simple

So, the main candidates are a location inside the Arctic Circle, a North American Desert and a spot in the Pacific Ocean. If weather station statistics are to be the arbiter then Yuma, Arizona is the sunniest place on earth. Is it as simple as that?

It’s really not that simple. There are a number of other complications that might make the story more complicated. These complications make an Australian claim to the title stronger.

The Case for Australia

A location in Australia makes it into the tenth position in the sunniest countries chart. Tennant Creek in Northern Territory has an average of 9.8 hours of sunshine per day.

The top place is taken by Yuma, Arizona with 11 hours a day. All the other locations in the top ten list are on the African continent. But, there’s more to this than meets the eye.

Closer to the Sun

A cleaner atmosphere means another 7% more UV light can penetrate to the earth’s surface. With pollution and closeness to the sun included in our evaluation of sunshine, it seems that we have to assume an additional 15% extra UV light.

The ozone hole forms annually over the Antarctic. When it breaks up during the spring months it forms into smaller pockets of ozone depleted air. These pass over Australia.

Reduced ozone in the air means more UV light penetrates the atmosphere. This could increase the damaging effects of sunlight in areas of Australia.

A sunny day and fine weather can be uplifting and even make you feel better. But, there’s a downside that should give anybody in a high sunshine location food for thought. Perhaps this is not a competition that anybody would want to win.

Australia covers a large land area. While the United States has very sunny locations it also has high rainfall areas and northerly less sunny locations. Africa is a diverse continent too with both equatorial rainfall and desert areas.

Australia’s climate has some variation but the NASA sunshine map clearly shows a large area of high sunshine across the country. We need to add to this, the impact of the elliptical orbit of the earth, low pollution levels, and the ozone hole. All in all, Australia as a big country with a massive amount and intensity of sunshine.

The downside of being a sunny place is that populations are exposed to significant risk. Skin cancer is a significant problem in Australia. It’s one of the most common cancers.

Skin cancer is caused by exposure to sunlight. Ultraviolet light damages the DNA in the skin. This can cause skin cell replication of faulty cells which then become cancerous.

Cutaneous malignant melanoma has caused the death of 1,700 people in Australia in 2016.  This is the most aggressive of the various skin cancers. This and other skin cancers are very much the downsides of being one of the sunniest places on earth.

Using sunscreen and if possible avoiding exposure to sunlight is key to protection against skin cancers.

As well as causing skin damage, sunshine can damage materials. Materials are faded by exposure to sunshine. Fortunately, research into UV protection for fabrics has produced some protection from fading.

An example of a fabric that has been developed for better protection from sun damage is Olefin. It’s perfect for outdoor applications such as patio furniture, pool beds, and bean bags. You may want to learn how to stop fabric from fading in the sun.

With sun protection for skin and materials, the negative impact of being one, if not the sunniest place on earth can be mitigated. Which sunny places can best mobilize this environmental resource? That will be a competition worth winning. It’s no secret that Australia has an extremely high UV index. This affects the longevity of outdoor furniture that is exposed to long hours of direct sunshine. Never fear! Our beanbags are designed for the harsh Australian outdoors!

Learn more about bean bags made with UV protection here.

Spread the love
This entry was posted in Fabrics.